Home DIVERSE 40-year-old woman marries herself after getting bored of waiting for the right... 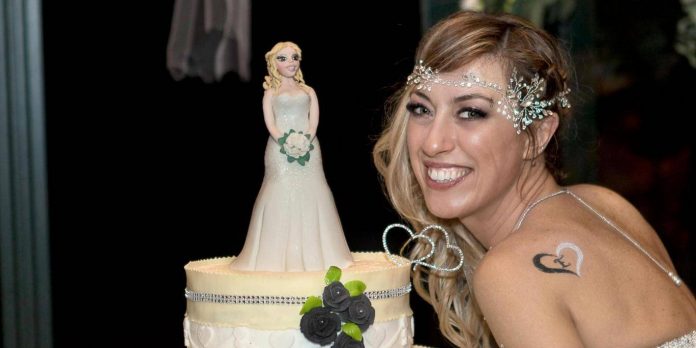 Despite there being nearly 7.5 billion people in the world, finding a soulmate can be tricky. Even with all the social media platforms, dating sites and TV shows dedicated to the task of matchmaking, it sometimes seems as if certain people are just meant to be alone – and that’s not necessarily a bad thing.

However, as a society, we’ve come to see marriage as a certain rite of passage in life. It’s a goal that many people strive for, even if they haven’t found the right person yet.

But marriage, as we all know, is not restricted to just a man and a woman. Indeed, sometimes it’s not even between two human beings. Over the years, people have married objects, landmarks and even their animals. Just to give a few famous examples: there was Eija-Riitta Berliner-Mauer, who married the Berlin Wall, Lee Jin, who made a matrimonial pact with a pillow, and, Erika La Tour Eiffel who, if you couldn’t work it out from her name, is wedded to the Eiffel Tower in Paris .

And then there’s Laura Mesi.

Mesi, a 40-year-old fitness instructor, had her own unconventional wedding recently in a ceremony that took place in front of friends and family. She didn’t have a groom, or a bride, or even anything to take the place of either of those things… because she married herself.

Speaking to Italian newspaper, La Repubblica, Mesi explained her reasoning for the wedding: ‘I told friends and family that if I had not found my soulmate by my 40th birthday I would marry myself.’

And, after 20 years of searching for Mr. Right, Mesi stayed true to her word.

The ceremony was not a low-key affair, either. Miss Mesi (or should that be Mrs.?) wore a traditional white gown as she walked down the aisle, was surrounded by bridesmaids on her big day, and (of course) presented herself with a special ring. She even had a white tiered cake, topped with a lone figure of herself.

There was food and drink, a lot of bad dancing, and a toast to the bride with champagne from bottles marked, “Single”.

In total, the wedding cost £8,700 ($11,700), all out of Mesi’s own pocket, and 70 people joined her in celebrating the marriage. The story of her one-person union has also garnered a lot of attention on social media, where Mesi’s album, “Laura Mesi Single Bride”, which contains 120 pictures from the day, has been liked and shared by people all over the world.

“This is my fairytale wedding – only without a Prince Charming,” the bride said.

Despite the joyous scenes and being happy alone, Mesi hasn’t ruled out getting married to someone else in the future: “If one day I find a man with whom I can plan a future I’ll be happy,” she explained, “but my happiness does not depend on him.” She’ll have to divorce herself first, though, which could get a bit sticky.

Of course, no marriage is truly sealed without a honeymoon – so Mesi had one of those, too. She’s jetting off to Egypt to celebrate married/single life. And, who knows, she might find a nice man while she’s out there.